For over a century, 34 Barnabites labored with heroic zeal and first-rate scholarship in the Kingdoms of Ava and Pegu (modern  Myanmar/Burma), undaunted by incredible hardships: a perilous voyage, pirate attacks, stormy seas, political unrest and warfare between local dynasties. Only extraordinary events brought this mission to a close: the French Revolution and Napoleon's anti-church policies in Europe and a series of clashes between Burmese and Talaings which led to the first annexation of Burmese territory by the British in 1825.

In 1722, the Vicariate of Ava and Pegu was formed and confided to Italian Barnabites. They enjoyed some success in Ava, Pegu, Syriam and Toungoo, the principal cities, despite the massacre of Bishop Gallizia and two priests (1745). Thirty-four year old Fr. Paul Anthony Nerini continued the work alone until he shared their fate (1756). New missionaries arrived in 1760, but all of them soon died except Fr. Percoto, an outstanding Vicar Apostolic (1768-1776). Around 1790, Rangoon had 3,000 Catholics, 2 parishes and several schools. scholarship in the Kingdoms of Ava and Pegu (modern Myanmar/Burma), undaunted by incredible hardships: a perilous voyage, pirate attacks, stormy seas, political unrest and warfare between local dynasties. Only extraordinary events brought this mission to a close: the French Revolution and Napoleon's anti-church policies in Europe and a series of clashes between Burmese and Talaings which led to the first annexation of Burmese territory by the British in 1825.

Our missionaries in Burma authored several works of fundamental value: The first Burmese dictionary, a Burmese grammar in Italian, a Latin-Portuguese-Burmese Dictionary which opened the way to a scientific comparative study of the local language, an Italian-Burmese-Pali dictionary, Pali being the sacred language of Hinayana or Theravada Buddhism, studies of Burmese history, geography and ethnography, a pioneering study of 300 flowers and 200 animals, and a description of precious stones from the Kiatpien mines of Ava (published in 1832 in the Journal of Asiatic Societies of Bengal), and a study of Burmese pharmacology with Italian and Latin nomenclature.

Even more fundamental was the compilation of the first Burman alphabet by Fr. Percoto, published in 1776 by the Roman Congregation for the Propagation of the Faith which produced 60,000 Burmese, together with 40,000 Latin, typographic characters. The first book printed in Burma was the above mentioned Latin-Portuguese-Burmese Dictionary.

A striking display of early ecumenism occurred in 1763 when a Theravadin monk or pongyi, a personal instructor of King Naungdawgyi, presented   Fr. Percoto with a “Compendium Of  Burmese Religion and Percoto responded with a Treatise of Christian Religion: A Dialogue Between a Christian and a  Theravadin Monk, a learned work. For popular use another Barnabite wrote “Dialogues Between a Primitive Native and a Former Theravadin Monk From Siam.”

Fr. Vincent Sangermano, besides authoring a celebrated “Relation of The Burmese Kingdom” (1808), also translated a book of laws, the Dhammathat, and a Buddhist cosmography with a history of kings, the Maharazaven. Both works were published posthumously in Rome (1833) with drawings prepared by students of Barnabite schools in Rangoon.

In conclusion, I believe that the values of Christian Humanism displayed in this Barnabite mission are acutely needed in our over technical, largely unthinking and secularized society and culture

HISTORY OF THE BARNABITE MISSIONS IN BURMA

In 1719 Pope Clement XI sent a mission to China headed by Msgr. Carlambrogio Mezzabarba from the Barnabite society. The papal legate that returned from China selected Fr. Calchi, a Barnabite priest, for the kingdoms of Ava and Pegu. This formal act gave Burma her first papal missionary. Fr. Calchi became the first Vicar Apostolic of Burma, though he was still a priest, and Fr. Vittoni, a secular priest was appointed to assist Fr. Calchi. Because of some misunderstanding Fr. Calchi was taken to the north and was given permission to preach Christianity in the kingdom of Ava.

After death of Fr. Calchi in 1730 and the separation of the two kingdoms, the Barnabite Mission did not work effectively as it was planned previously because of lack of personnel.  Listening to the difficulties of Fr. Gallizia, the Holy See eventually combined the two kingdoms into one unit thus creating a Vicariate Apostolic and Father Gallizia was appointed as its first Vicar.

The First Group of Barnabites (1743) Bishop Gallizia returned to Burma from Rome after his Episcopal consecration with three other learned priests for the mission in Burma, Fr. Paul Marie Nerini, Fr. Alexander Mondelli and Fr. John del Conte. They were accompanied by an experienced surgeon Br. Angelo Cappello. Barely after two years the Peguans suspecting that the people of Syriam favoured the Burmese, made a plot and massacred several people including Bishop Gallizia, Fr. Mondelli and Fr. John del Conte. Fr. Nerini and Br. Angelo somehow escaped this tragedy.

Second Group of Barnabites (1754) Pope Benedict XIV elected Fr. Nerini as Bishop of Priense and Vicar Apostolic of the two kingdoms of Ava and Pegu and four new missionaries were sent out for the work. Fr. Vincent Casanova, Fr. Leo Lindermann, Fr. Armadeo Gazzei and Fr. Hermingild Quardrio. They all belonged to the Barnabite order. They set out from Paris in two different ships which never arrived Burma. The first sank in the Atlantic and the other in the Gulf of Martaban. In the war between the Talaings and the Burmese under the leadership of King Alaungpaya of Shwebo, Fr. Nerini was suspected of French ties and was beheaded. Br. Angelo too was killed by a canon ball during the siege. 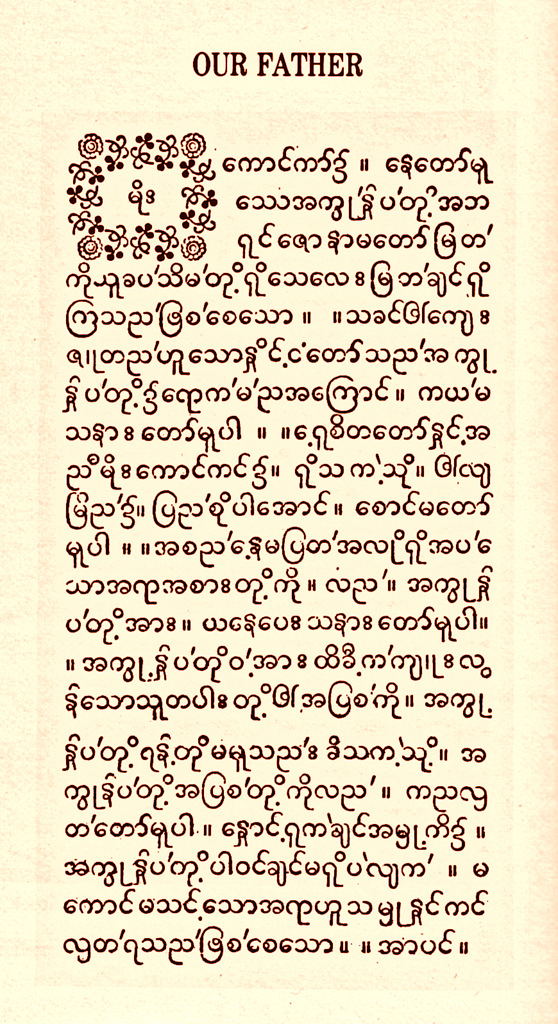 Pope Clement XIII recommended the two Barnabites, Fr. Avenati and Fr. Percotto to the Bishop of Mylapore to help the mission in Burma. These two arrived in Rangoon in October 1761. Fr. Avenati remained in the south and Fr. Percotto went on to join Fr. Gallizia in Chaung U, Ava. What Fr. Precotto founded out was the amazing existence of several Catholic preserving the Faith they had received some 150 years ago, from the fall of Syriam.

Fr. Gallizia died in 1763 at Shwebo and in the same year Fr. Avenati also died in Rangoon while celebrating Holy Mass on Easter Sunday. These tragedies left Fr. Percotto alone in his missionary apostolate. Fr. Percotto despite his heavy schedule and responsibility found time to write various works in Burmese. Catechism Books, Mass Books, translation of the Gospels and the Epistles. This is just to mention a few of his multiple works.

Fourth Group of Barnabites (1767) Rome sent out another batch of missionaries.
Fr. Gherardo Cortenovis, Fr. Melchior Carpani, Fr. Antonio Filiberto Re and Fr. Ambrose Miconi. Rome appointed Fr. Percotto as Bishop. He was consecrated bishop on 31th January, 1768. On account of the influence of a Frenchman Chevalier Millard and his band of Christian soldiers in the court, Bishop Percotto received many favours from the King. In 1772 two more missionaries arrived in Burma. Fr. Marcello Cortenovis and Fr. Gaetano Montegazza. The latter became a scholar in Burmese and Pali. Bishop Percotto died on 12th December 1776 at the age of 47. Fr. Gherardo Cortenovis succeeded Bishop Percotto as Bishop. At this time there was a new King on the throne of Ava who made it difficult for the Christians to practice their faith, and Bishop Gherardo too left for Rome but never to return to Burma. He died in Mylapore, Madras.

Bishop Montegazza was appointed Bishop of Ava and some more missionaries were sent to help the mission in Burma. Gradually the presence of the Barnabite Missionaries dwindled and Oblates of the Blessed Virgin Mary initiated their work in Burma. The first group was led by Msgr. Frederick Cao with two priests, Fr. Tarolli and Fr. Ricca. By 1837, there were quite many of these missionaries found in Burma. Moulmein and Bassein became the headquarters for their mission activities."